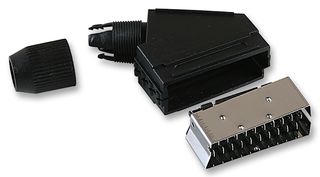 The EuroSCART is a 21 pin audio/ video connector which is also know as the Euroconector, EuroAV or Péritel. This connector is identical to the 21 pin audio/ video connector used in Japan and Asia however this is referred to as the JP21, RGB-J or Japanese 21 pin (EIAJ TTC-003). The only difference between the EuroSCART and the JP21 plug is the pin assignment inside the plug for each element of the RGB signal. Please see below.
The EuroSCART plug uses the following pin allocation.
The JP21 plug uses the following pin allocation.
So as you can see above all the pins are different accept pin 15 for the red channel. All SCART televisions in Europe are wired to accept EuroSCART wired cables. Also the range of SCART to HMDI converters including the non branded Chinese SCART to HDMI converters sold on Amazon are wired for EuroSCART.
The range of XRGB up-scalers manfactured by Micomsoft of Japan only except JP21 cables. These include the following up-scalers; XRGB-1, XRGB-2 & XRGB-3. The lastest up-scaler from Micomsoft, the XRGB-mini Framemister doesn't not have a 21 pin input socket, instead it has an 8 pin mini DIN socket for the RGB input and the unit is supplied with a female 21-pin to 8 pin mini DIN adapter which is wired for JP21. We do sell a female 21 pin to mini adapter wired for EuroSCART which means you can use your current EuroSCART cables on the XRGB-mini.
So in summery the only difference between the EuroSCART and the JP21 cables is the pin allocation which means you cannot use a JP21 cable in a EuroSCART television or a EuroSCART cable in a Japanese device like the range of XRGB up-scalers. You can however, use a EuroSCART to JP21 adapter will allow you to use your EuroSCART cables on the XRGB-1, XRGB-2 & XRGB-3 up-scaling units.